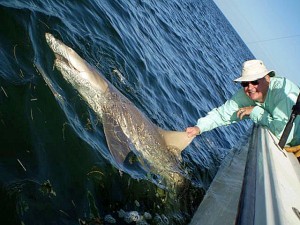 Well, here I am 45 year old and still kickin’! Who would’ve believed it.

The fishing has just been great. Fishing in the channel and on the reef has been non-stop action. Lots of nice snapper, grouper, and mackerel. We’ve been hitting the edge of the reef alot to also keep our eye out for sailfish. They’ve been coming in and chasing the ballyhoo in 20-40 feet of water. This past week we’ve caught several sailfish with most of them being sight casted to. It’s alot of excitement when you see the fish come and eat your bait. We also fished a few days in the bay with great snapper and mackerel action. Dan Fisher caught the biggest lemon shark ever caught on my boat last Friday. It was all of 9+ feet long! It ripped 50lb. braid off of the reel like it was thread. It finally stopped about 300 yards away. He slowly worked it back to the boat, and we got pictures and a release after a nice thirty minute fight.

Well, Until Next Time….